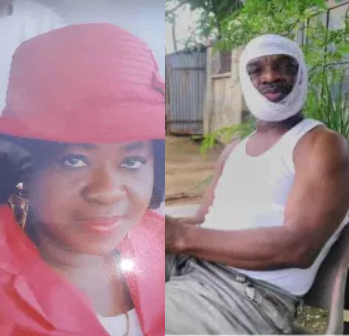 A man has narrated how his houseboy killed his wife on her birthday and also tried to kill him too.

His wife, Victoria Wilcox, a mother of two, from Arondizuogu, Imo state, woke on that fateful day to mark her 55th birthday, not knowing it was going to be her last day.

At about 8pm, their houseboy named Abdulkareem Babangida, simply called Abba, a native of Kachia LGA of Kaduna State, clubbed Mrs Victoria Wilcox to death with a newly acquired cutlass.

When she was dead, he dragged her lifeless body and deposited it under a tree in the compound then waited patiently to administer the same treatment to her husband, Ralph.

It was revealed that the deceased retired from the Nigerian Housing Insurance Trust Fund (NHITF) in 2005 and started her private business. Victoria and her husband then hired Abba in July 2019 to assist in Victoria’s shop at the Aco…