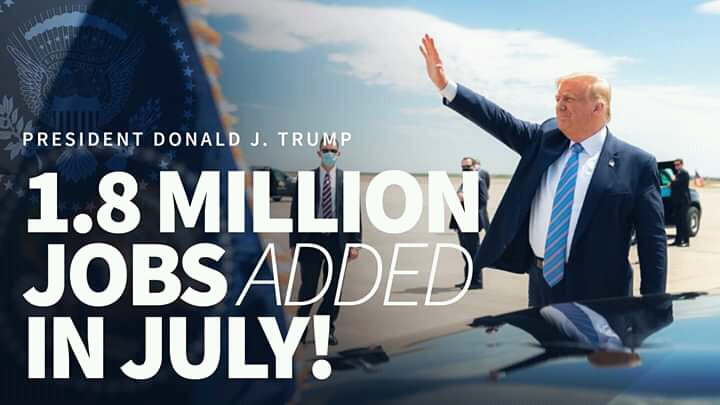 The seasonally-adjusted national unemployment rate is measured on a monthly basis in the United States.

Additional statistics from the BLS paint an interesting picture of unemployment in the United States.

In March 2020, the state with the highest (seasonally adjusted) unemployment rate was Louisiana with 6.9 percent, followed by Nevada, West Virginia, the District of Columbia, and West Virginia.

Unemployment was the lowest in North Dakota at 2.2 percent. Workers in the leisure and hospitality industry suffered the highest unemployment rate of any industry at 39.3 percent as of April 2020.

The U.S. economy added 1.8 million jobs during the month of July, sending the unemployment rate down for the third straight month — a drop that fell in line with economist predictions and pointed to the recovery that began before infections started ticking up.

July’s gains were modest in comparison. And economists warn that the monthly unemployment number, based on a survey taken in mid-July, lags behind the more current snapshots of the market, as the pandemic’s rise has touched off more closures, restrictions and disruption around the country.

The job growth was driven by hiring in sectors that had been hard hit by the pandemic, such as leisure and hospitality, which increased by 592,000 jobs — about a third of the total monthly gain. Employment at restaurants, bars and other food and drink services rose by 502,000. Retail employment gained back 258,000 jobs. Amusements, gambling and recreation added another 100,000.

But employment in those sectors remains well below pre-pandemic levels, dashing hopes of a v-shaped bounce-back, with more than half of the 22 million jobs that have been lost since February yet to recover.

Below are some reactions to the president’s claim: