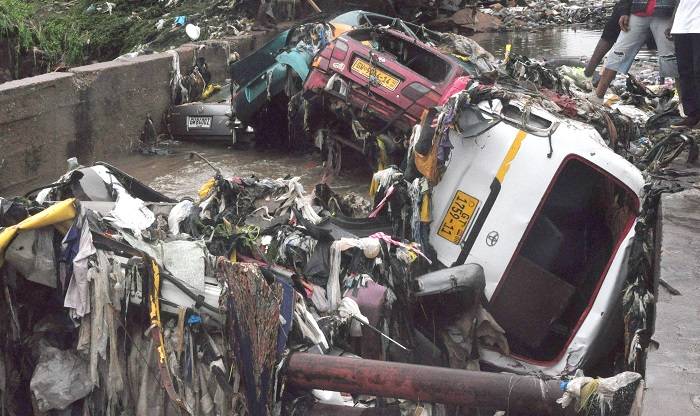 A lot of bad things often happen in our lives which becomes indelible even though we always try to lump them into our subconscious minds.

In that regard, some series of events happened in Ghana that affected us all collectively and although we all try to forget about it and move on with life, it still lurks in our shadows and cause us great misery whenever we recall.

See below for what we are talking about.

The Kintampo story comes in two folds. The first one has it that more than 18 people, mainly high school students, died after a large tree fell on them at a popular waterfall spot in Kintampo in 2017. News reports say the students were swimming during a storm when the freak accident happened in 2018. The other one happened in 2020 and it’s about a fatal accident that occurred on the Kintampo-Tamale highway in the Bono East Region left at least 30 people burnt to death. These two events have remained unforgettable to all Ghanaians.

What started as an ‘ordinary’ rainfall on June 3, 2015 and later became ‘cats and dog’ soon turned into a disaster. 154 people died and hundreds suffered severe burns resulting in permanent physical disabilities which severely undermines their suitability for the job market after the heavy torrential rainfall ‘met’ an explosion at Kwame Nkrumah Circle. The news spread like wildfire and caught the attention of all foreign media outlets and tabloids. It was a gloomy and grotesque event that Ghanaians don’t want to be reminded of.

4. The death of Fiifi Attah Mills

President John Evans Fiifi Attah Mills became the first Ghanaian president who died while in office. The former Ghanaian president who ruled in the country on the ticket of the National Democratic Congress (NDC) died on July 24, 2012 at the 37 Military Hospital in Accra, three days after his 68th birthday. Though the cause of death was not immediately released, it was concluded that he died of throat cancer.

Ghana’s quest to end their long drought in the continental showpiece came crushing down when Ivory Coast ended that dream in a pulsating penalty shootout. After playing an interesting draw game at the end of 90 minutes and an additional 30 minutes for extra time, Ivory Coast ripped our hearts when they became eventual winners after the shootout. As a football fan and other fanatics in the country, this is one of the moments in the country we are yet to forget.

Three girls from Takoradi namely Priscilla Blessing Bentum, 21, Priscilla Mantebea Kuranchie, 18 and Ruth Love Quayson, 18 were kidnapped by a syndicate and murdered. To this day their remains have not been found although the police administration some bones that were discovered in a septic tank in Takoradi was revealed to be that of the girls, something the indigenous people, including the girls’ family, have vehemently denied and asked for an independent inquiry.

Ebony was full of life and the biggest female artiste in Ghana. Unfortunately, she died in a ghastly accident on February 8, 2018, whilst she was returning from Sunyani to Accra after a visit to her mother. Her close friends Franklina Yaa Nkansah Kuri and soldier Atsu Vondee were also killed in the fatal accident. The hit songs she left behind console us that she’s still lurking behind in ot subconscious minds.

This sad incident happened in 2017. Initial reports have it that the fire was first noticed by attendants at a gas station when LPG that was being discharged at Atomic Junction started to leak. The station attendants saw the leak and evacuated the area. The leaked gas had by then formed a cloud in the sky above the station. According to reports, a kebab seller opposite the station then started a fire to sell his product. Unfortunately, the fire shot up into the air and connected with the “gas cloud”; catching fire instantly. The first explosion was said to be so severe that students of Presec, Legon had to be evacuated. At least seven people were killed and scores injured.

Ghana’s most prolific player, Asamoah Gyan literally broke the heart of the nation after he missed a crucial penalty in the dying embers of a World Cup quarter finals encounter between Ghana and Uruguay in South Africa in 2010. If he had scored that goal, which was the last kick of the game, Ghana would have become the first country in the history of the World Cup to have progressed to the semifinals of the tournament. Eventually Ghana was bundled out through the penalty shootout after the game was tied at 1-1 after extra time.

I watched that game at a pub at Spintex in Accra with my friends. How I managed to get home after that heartbreaking episode still remains a mystery to me to this day because I was completely shattered. In fact, I nearly collapsed. The next day, Ghanaians from all walks of lives, from social to mainstream media rained insults, curses, and swear words at Asamoah Gyan and even though it has been a decade, no Ghanaian including myself have been able to forget it. Even Ghanaian pastors invoked curses on Luis Suarez, the antagonist who denied Ghana a famous win.