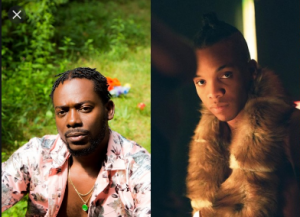 Nigerian singer Tekno has congratulated and hailed Adekunle Gold as he reacts to his recent album Afro Pop Vol.1 classifying it as a fire album.

Tekno who was featured on the album appreciated Adekunle Gold for such an opportunity as he congratulates him on a good job done.

The album which is made of 10 songs seems to be a very ‘powerful’ one as almost all music acts are congratulating him for giving his fans such a masterpiece.