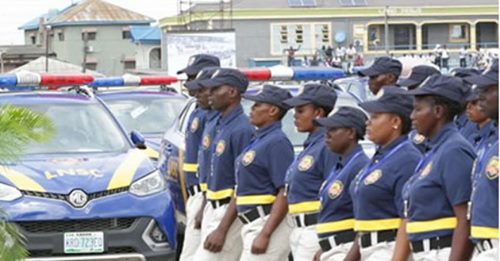 Police operatives from State Criminal Investigation and Intelligence Department, SCIID, Panti, Yaba, Lagos have commenced investigation to unravel how members of secret cults were recruited into the Lagos Neighbourhood Safety Corps, LNSC by the agency’s management.

Operatives of state criminal investigation and intelligence department, SCIID,Panti,Yaba,Lagos state command, have commenced investigation on how members of secret cult were recruited into the Lagos Neighborhood Safety Corps,LNSC .

It was followed by arrest of six officers of LNSC,at intelligence unit in Ejigbo Division, who were later transferred to SCIID for interrogation over membership of a secret cult known as Aiye.

According to a sources at SCIID, Panti said that the six suspects are:Ololade Fayoda, Abass Idris, Waisu Olayinka, Ajetunmobi Seyi, Adeleke Azeez and Adeosun Michael, who are under interrogation on how they were recruited into the agency .

Through the confessional statements of the suspects may have linked some Senior officers, who were said to have known that the suspects and other engaged the agency were members of secret cults.

Our reporter gathered that bobbing boasts in June when operatives from Ejigbo Division led by CSP Olabisi Okuwobi, received intelligences that some members of Eiye and Aiye cults were having meeting at Jakande Estate on how to carry out reprisal attack against themselves.

The officer stormed the place and made arrest of the leader, Adebona Godwin a.k.a Small and 13 others ,while some members escape

During interrogation, some officers of the LNSC were mentioned and they were arrested and transferred to the SCIID Panti for further investigation and have confessed their involvement.

The suspects were among the suspects paraded by the Commissioner of Police, Mr Hakeem Odumosu, during the week at the State Command, Ikeja, Lagos.
The Police boss reiterated the preparedness of the Command to fish out any criminal within the State and stated that the suspects will be charged to Court after the conclusion of the investigations.