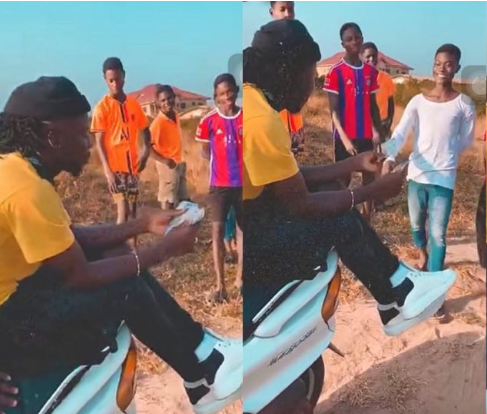 Ghanaian dancehall musician, Livingstone Etse Satekla, well known in the entertainment industry as Stonebwoy has been spotted in a new video sharing GHC100 notes to some street children.

In the video, the “Putuu” hitmaker was seen lining up the kids on the site and dashing out some monies to them.

Stonebwoy has been one of the musicians in the industry who are known for their generosity to their fans and to the needy in society.

In recent times, the musician has trended on social media for so many reasons which are all not good.

Earlier it was reported that he was involved in a physical fight with Sarkodie’s manager, Angel Town during the rehearsal towards Sarkodie’s BlackLove Concert and also his Godfather in music, Samini also threatened to expose him for claiming that he never contributed to his career.

Desspite of all that is happening around him, Stonebwoy still went ahead to show love to the street where he came from.