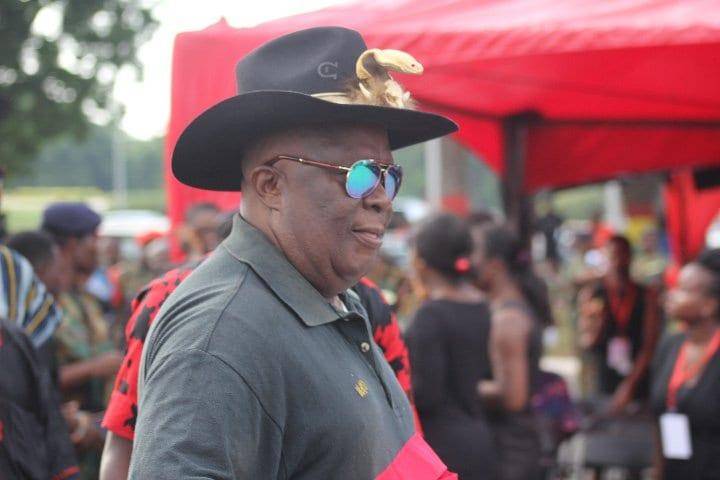 Once upon a time, the political landscape was infused with a lot of hot adrenaline from maverick Ghanaian politician, Kofi Wayo. He pervaded the system with his no-nonsense, brash and straightforwardness politics and this endeared him to a lot of neutrals.

Kofi Wayo, real name Charles Eric Kofi Wayo is the son of Mr Kwashie Akakpo, a cocoa farmer and mother Dede Aku of Doryumu, near Somanya in the Eastern Region over 50 years ago.

He spent his the vast number of his years in the US where he took up a lot of menial jobs after which he eventually started selling guns. Chuck, as he’s affectionately called had said in a previous interview that he sold guns to clients all over the world. He made it clear though that he never sold arms to any country in Africa.

He said that he met all kinds of people — presidents, army generals, spies, mercenaries, agents, criminals — indeed, all kinds of characters making him very savvy in the business. ‘When you get out there in the world you learn, learn so much you get to know everything. Most of my knowledge that’s how I got it — from the practical side. While selling guns in the Middle East he realised they were willing to trade oil for guns and made investments there eventually ending up with a guy called Chris who owned a small oil business there.

‘He supplied the oil and I paid him with guns. In 1988, I sold my company and joined his company full time.’ Chuck said he is one of eight partners and has 10 per cent in the company. Upon returning to Ghana, he decided to join the New Patriotic Party but his first attempt at elections as a potential MP ended in disaster in 2000.

He was defeated as the New Patriotic Party (NPP) parliamentary candidate for the Ayawaso East Constituency. After that bitter experience, he dumped the NPP and formed his own party called United Republican Party (URP). Before that, he joined the People’s National Convention (PNC) and contested for the flagbearership of the party but he lost to Dr Edward Nasigiri Mahama.

He later blasted the NDC and NPP and accused them of being the problem of Ghana. ‘We think that the two leading parties, NPP and NDC had disappointed us. There should be a break from the past,’ he said.

Despite his political oblivion and the fact he couldn’t sustain his party, Kofi Wayo kept the government of the day on its toes with intelligent political discourses. He famously said radio that if he comes to power, he would be the best president Ghana has ever seen. Speaking on Angel FM, a Kumasi-based radio station’s Morning Drive programme recently, Wayo told show host Kwame Adinkra that should he become the next president, he would irrigate and cultivate every unused land in the country.

‘When I become president on January 7 next year, I’ll plant pawpaw on the vast stretch of land along the Accra Osino road and convert the large tract of land along the Accra-Oda road into okra farm,’ he said, contending that the two farms could generate in excess of $2 billion annually. Kofi Wayo has suddenly decided to bow out of the political scene and observe things from afar without interfering, as opposed to his volatile exuberance years ago.

Just recently, he gave us a clue as to why he’s no longer active in the political circles. He said: ‘I found that out they are liars after dealing with both political parties. It is the culture though it is not their DNA but we are not sincere people and that is the culture. We have no ideology, we have no philosophy and the politicians have left the people to suffer so I go to the villages to help the people.’

See below for his photos;