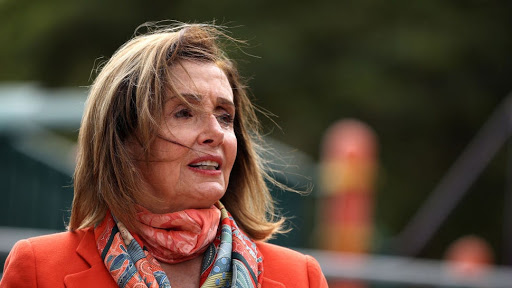 House Minority Leader Kevin McCarthy (R-CA), the top elected Republican in the House of Representatives, blasted Speaker Nancy Pelosi (D-CA) on Wednesday afternoon for scheduling an appointment at a closed San Francisco hair salon on Monday, getting caught on camera seemingly without a mask, subsequently blaming the hair salon for allegedly setting her up, and then claiming she was owed an apologyfor the whole debacle.

“The Speaker of the House is demanding an apology from a salon owner—a single mom—who has been forced to shut down her business for months,” tweeted McCarthy on Wednesday. “Pelosi’s privilege exposed her hypocrisy. Now, as usual, she’s trying to blame someone else for her failure.”

The Speaker of the House is demanding an apology from a salon owner—a single mom—who has been forced to shut down her business for months.

Pelosi’s privilege exposed her hypocrisy. Now, as usual, she’s trying to blame someone else for her failure. https://t.co/QCT3RRg7yE

According to Fox News, Pelosi went for a hair appointment at eSalon, a San Francisco business that rents out chairs to individual stylists, after her assistant reached out to a stylist. Erica Kious, the owner of the salon, told the news agency that she is a single mother with two kids, and that the speaker’s visit was a “slap in the face” because the business has been forcibly closed under coronavirus restrictions.

During a press conference on Wednesday afternoon, Pelosi suggestedshe was only willing to “take responsibility for falling for a setup,” and didn’t actually know that she couldn’t go in for an appointment under current restrictions.

“I take responsibility for trusting the word of a neighborhood salon that I’ve been to over the years many times. And that when they said, ‘Well, we’re able to accommodate people one person at a time, and that we can set up that time,’ I trusted that,” she said.

Congressman Matt Gaetz (R-FL) posted a video of the speaker saying “leaders take responsibility,” and juxtaposed it with a clip from the press conference during which Pelosi maintained that she would not apologize, but rather, believed she was owed an apology for being set up.

Donald Trump Jr., responding to the video segment, called Pelosi the “Marie Antoinette of the 21st-century.”

Nancy Pelosi is the Marie Antoinette of the 21st-century. https://t.co/Dmp1mfsTzv

Back in April, the Trump campaign hit Pelosi with the Marie Antoinette comparisons when she boasted of her freezer full of gourmet ice cream amidst widespread economic suffering and the financial devastation associated with the coronavirus pandemic.

Americans are losing their jobs since the virus rocked the economy.

Nancy Pelosi blocks funding for people to keep getting paychecks.